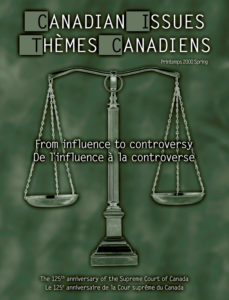 From Influence to Controversy: The 125th Anniversary of the Supreme Court of Canada

The turn of the millenium marks the 125th anniversary of the Supreme Court of Canada (“SCC”) and the 50th anniversary of the abolition of appeals to the Judicial Committee of the Privy Council in England. In recent years, particularly since the 1982 introduction of the Canadian Charter of Rights and Freedoms, the SCC has become a more active participant in the development of Canadian public policy, and in the shaping of Canadian attitudes. The following collection of articles explores this new found influence of the SCC, along with the issues and controversy that have naturally arisen with its increasing role in defining modern Canadian values.

Be the first to review “From Influence to Controversy: The 125th Anniversary of the Supreme Court of Canada”

Mapping 1812 – A teaching guide by the Association for Canadian Studies

Made to Measure: Statistics Canada @100

Federalism and Identities: The Constitution. The Charter.