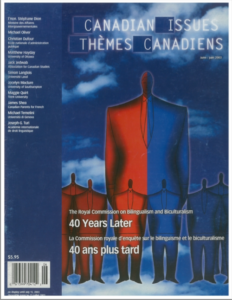 The Royal Commission on Bilingualism and Biculturalism: 40 Years Later

Canada’s ongoing effort at self-definition and the historic conflicts to which it has given rise have all the makings of a family squabble. Some 135 years later, the contract that enacted the Confederation is the object of divergent interpretation between the consenting parties. The dispute involves the identification of the signatories themselves. While some insist that there were two equal equal partners (British and French – call them the parents) that signed on to the original deal, others maintain that there several entities (the provinces – call them the extended family) that were contracting parties and not just witnesses of the pact of 1867. Those who joined the Canadian family at a later time (the offspring) have developed their own sense of identity. Not to mention the Grandparents or Elders (our aboriginal peoples) that claim that they were not taken into sufficient account by the contracting parties – however they are defined – and often remind the parents and the offspring that they have collectively erred in this regard.

Be the first to review “The Royal Commission on Bilingualism and Biculturalism: 40 Years Later”

A-HISTORICAL Look at John A. Macdonald? Seeing Canada’s First Prime Minister in the Context of His and Our Times